In the first quarter of 2019, T-Mobile built on the success of the preceding year: the operator saw a growth in fixed-line and mobile services, celebrated the first anniversary of Magenta 1 on the market and invested in innovations

Prague, 9 May 2019 - T-Mobile entered the new year successfully, seeing growth in both the customer base and in the basic financial indicators. Consumption of fixed-line and mobile services grew, particularly in the area of data. For the first time in history, the number of contract customers exceeded the four-million mark. The operator focused on improving coverage and also introduced several new features in its offer. The first quarter was marked by innovations that provide attractive solutions to customers and make their lives easier.

Mobile market: As at 31 March 2019, T-Mobile’s mobile services were being used by nearly 6.2 million customers, of whom four million were contract customers. The number of customers using prepaid cards has been stagnating for a while and T-Mobile therefore focused also on them in the last quarter. The operator introduced a new edition of the prepaid Twist card intended for occasional data users: customers do not pay for data in advance but only when they use it. For an amount capped at CZK 10 a day, they can use up to 100 MB of data browsing the web.

Fixed-line market: Fixed-line services, including xDSL, Pevný internet vzduchem (“Fixed-Line Internet over the Air”) and Pevný internet do zásuvky (“Plug-in Fixed-Line Internet”), are currently being used by 274,000 customers, which is 45% more than last year. In January, T-Mobile discontinued the sale of modems and set-top boxes and now only leases the devices to customers, while guaranteeing free maintenance, replacement in the event of breakdown or device replacement when switching to another technology.

TV: The TV service from T-Mobile on the IPTV and satellite platform is now being used by 101,000 customers, including 54,000 who purchased the service in the past 12 months. Most customers use the Magenta 1 service. The most popular and the most appreciated aspect of IPTV continues to be the time-shifting feature: customers currently view more than three million programmes using this feature every month.

Converged services: Magenta 1 celebrated its first anniversary on the market in February. The more mobile and fixed-line services customers combine under one contract within this service, the more benefits they receive from the operator. One year after the introduction of the service, two-thirds of customers are using a combination of mobile and fixed-line services, while the remaining third only combine mobile services within Magenta 1. The largest number of customers use four services, with the most popular and most frequent combination being two Mobil S generation plans with fixed-line home internet and T-Mobile TV.

“Our long-term objective is to become the first choice for all customers using mobile and fixed-line services, IPTV and smart technologies,” saysJuraj Bóna, Director of T-Mobile Czech Republic, adding: “Based on the success of Magenta 1 after one year on the market, we see that we took a step in the right direction. It is a unique solution which, thanks to its flexibility, suits truly every household. Other than financial savings and a number of benefits, what customers appreciate the most is that we do not dictate anything to them. The choice of services is up to them.”

The volume of transmitted data has been growing fast

The number of minutes called and text messages sent in the T-Mobile network has remained approximately the same; however, a current trend consists in the growing consumption of data services. The overall volume of data transmitted by means of converged solutions has grown by nearly 95% year-on-year to more than 65,390 TB. While customers with the new generation of tariffs Mobil consume 1,8 GB of data per month, in Magenta 1 the average mobile data consumption is 2,7 GB per SIM card per month.

The operator has again expanded coverage and enhanced internet speed

Beginning of the year marked by innovations

Also at the beginning of the year, T-Mobile gradually confirmed its role as a leading innovator among the Czech operators. It started testing LTE-V (LTE for Vehicles) technology in pilot operation for the entire Deutsche Telekom Group. LTE-V enables direct communication between vehicles and the surrounding infrastructure and thus increases road safety. Another example of when technological solutions help increase safety and save lives is the installation of three active emergency points in the Brdy Mountains. T-Mobile put them in operation in cooperation with the Pilsen Region at the end of March. They are connected to Sigfox technology and can be used to call Integrated Rescue System units in the event of an emergency.

T-Mobile is also increasing customer satisfaction by means of the My T-Mobile mobile application, which is now actively used every month by more than 911 thousands customers, they represent 33% of users with smartphones. The most appreciated is the overview of consumption status and current offers at T-Mobile. T-Mobile was the first operator in the Czech Republic to have launched Apple Pay in this self-service application, which enables customers using an iPhone to conveniently pay their Statements of Services and top up their credit. T-Mobile was also the first operator to introduce to its customers Pepper T-Dee, a Czech speaking humanoid robot which makes their time spent at a shop more fun and pleasurable.

Financial indicators:Total revenues from mobile and fixed-line services including hardware sales exceeded CZK 6.6 billion in the first quarter, which is a 2.1% year-on-year increase. The results confirm the company’s good performance and its position as the number-one operator on the Czech market. 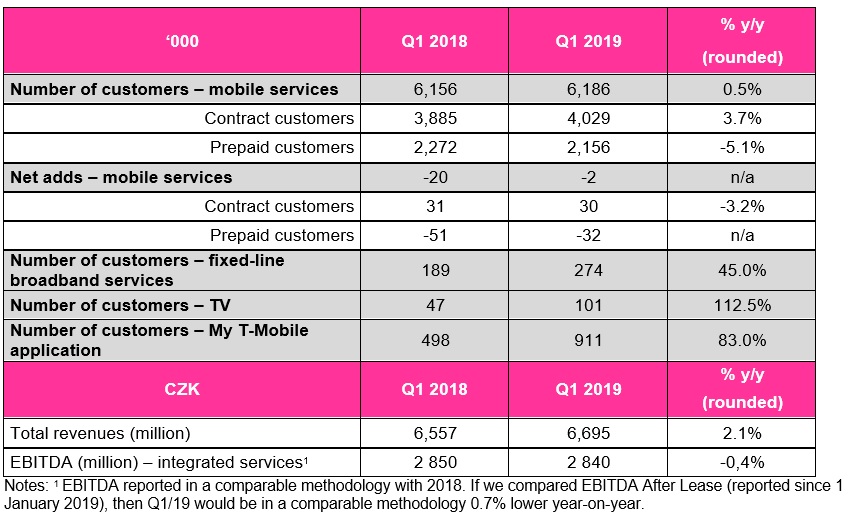