T-Mobile’s evaluation of EU roaming traffic in its network during July and August indicates that, compared with last year, Czechs used mobile services abroad significantly more than foreigners in the Czech Republic.

“Compared with last year, our customers called nearly three times more and used data services almost ten times more in the EU countries during the summer. Conversely, the number of outgoing calls made by EU citizens in the T-Mobile network grew by only 75% on average while their data consumption increased approximately fivefold,” says Pavel Henke, Vice President Wholesale at T-Mobile, adding that the number of outgoing text messages increased only slightly. 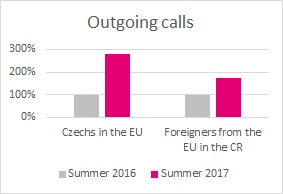 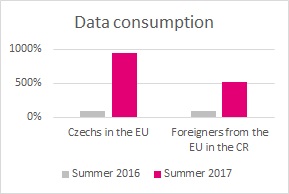 Visitors from the EU in the Czech Republic: the largest number of calls were made by Romanians and Bulgarians
Differences were also apparent among tourists from different countries – simply stated, the increase in consumption of mobile services by visitors from Western Europe was in most cases smaller than that by citizens of the former Eastern Bloc, who are more price sensitive. Visitors to the Czech Republic whose data consumption in the summer grew the most following the introduction of the new EU regulation governing roaming prices included those from Romania, Italy, the Netherlands, Slovakia and Poland. With respect to voice services, the first two positions were clearly occupied by Romanians and Bulgarians, who called five times more and three times more, respectively, when visiting our country in comparison with last year.

Czechs in the EU: the top three countries include Slovakia, Germany and Austria
As in previous years, Czechs used roaming mobile services in the summer most often in Slovakia, Germany and Austria. It can be expected that they largely did so when passing through these countries to tourist destinations in Southern and South-eastern Europe. The other countries filling out the top ten in mobile data consumption while roaming were Croatia, Poland, Italy, France, Greece, Hungary and Spain.

The largest number of foreigners visiting the Czech Republic were Germans; the number of Dutch saw the biggest increase
During the summer, the number of foreign mobile numbers registering in the T-Mobile network was approximately 20% higher in comparison with last year. The top five included citizens of Germany (accounting for nearly one-half of the entire top five), Slovakia, Poland, Ukraine and Austria. When comparing the change in the number of roaming users with June 2017, it was the Dutch who saw the biggest increase. The number of visitors from the top-five countries listed above in the operator’s network was more or less stagnant or even decreased, which is presumably attributable to the fact that these foreigners largely spend a longer time in the Czech Republic and leave the country during the summer or that (in the case of visitors from neighbouring countries) they live in border areas and visit our country frequently throughout the year.

T-Mobile was the first operator in the Czech Republic to have introduced EU Roaming on 2 April 2017 as part of its new Mobil tariff plans and new tariff plans for business customers, which were introduced one day later. The operator activated tariff plans complying with the aforementioned EU regulation for all residential customers on 11 June this year.