T-Mobile has presented its third fiscal quarter results, despite the current market situation, confirming the company's strong stability. Data consumption increased significantly again in a year-on-year comparison, and the number of customers rose to 6.4 million. T-Mobile continues in significant investments in mobile and fiber infrastructure to offer customers the highest quality of connectivity and services.

There was a slight decrease in the volume of called minutes (by 2.4%) in the third fiscal quarter, on the contrary, the number of sent SMS increased slightly by 3.7%. In response to the higher data usage, new tariffs have been introduced to meet the current needs of customers.

Mobile data consumption continues to grow, up 43% year-on-year. Recognizing the need for quality high-speed connectivity, T-Mobile continues to expand its 5G and fiber network. Compared to the second fiscal quarter, the number of fixed connections increased by nearly 22,000 and 5G network population coverage accelerated by 8%. Expansion of construction and coverage will continue this year and next.

„T-Mobile has long been investing in the development of fixed and mobile network infrastructure. These investments reached an average of CZK 2 billion per year. Despite the challenging situation in the market, due to which we are unfortunately falling behind our planned targets, I am really pleased that we are able to continue investing and upgrading our infrastructure, offering our customers connectivity of the highest quality and services they trust. The trust of our customers is our commitment” says Jose Perdomo Lorenzo, CEO of T-Mobile Czech Republic.

T-Mobile's summer campaign brought customers a new portion of data if they had already used up their regular data. The summer offer reached a total of 689,000 activations, 75% of which were customers with a contract. Magenta waterproof bags – data usage gift – disappeared swiftly from the stores. Customers who took advantage of summer promotions increased their data consumption by up to 70%.

T-Mobile customers travelled a lot abroad during the summer: Austria, Poland, Germany, Slovakia and Croatia were the most visited countries.

T-Mobile continues its activities to support Ukrainian citizens in the Czech Republic. In addition to integration activities, they can continue to benefit from discounted calls to Ukraine. In the third fiscal quarter, the number of called minutes increased 74 times, and visitors from Ukraine consumed 300 times more data in our territory year-to-year.

The gift for T-Mobile TV viewers was the expansion of the content due to the acquisition of broadcast rights, as well as the conversion to an HD signal. At the same time, T-Mobile became the first third-party company to include CANAL+ in its offer, including the popular Premier League.

T-Mobile has also long focused on building private 5G networks for universities and industry. In September, the operator successfully launched his first private 5G network in commercial use at KVADOS, a company specializing in logistics software solutions.

The Rich Business Messaging service, which T-Mobile was the first operator in the Czech Republic to offer, aims to simplify corporate communication with customers. It enables companies to communicate with customers in real-time using secure messages, without the need to use third-party applications.

T-Mobile has long been cooperating with Czech secondary and higher education institutions. This school year, T-Mobile extended the cooperation with IT and ICT-focused high schools and universities. The cooperation occurs in concrete projects, in the form of, for example, hackathons, cooperation on the so-called T-Day (an event for high school and university students) or in the form of long-term internships at T-Mobile. The company also supports professional development of its employees and talents. T-Mobile has launched two programmes for 2022 and 2023 - Talent Pool and T-Challengers. The aim is to enable employees to work on a project of their interest or to have one of the Management Board members as a mentor.

In the third fiscal quarter, T-Mobile continued to implement its ESG strategy. Together with Deutsche Telekom, T-Mobile supported volunteer projects as part of the What We Value initiative. The global platform focused on young volunteers' projects and resulted in winning projects for Czech non-profit organisations, which received support worth EUR 70,000 and CZK 200,000.

In response to the ever-increasing number of online scams, T-Mobile as a digital leader also focused on the topic of online safety. In cooperation with the Police of the Czech Republic and the Ministry of the Interior, it launched the educational campaign Klik pro klid, which included a series of training sessions and online support for safe online behaviour, focusing on strong passwords and mobile payments.

Revenues grew by 5.1 % year-on-yearto CZK 22.1 billion. The stable performance was also confirmed by the EBITDA indicator, which increased by 2.9%.

T-Mobile mobile services were used by 6.4 million customers in the third fiscal quarter, representing a year-on-year increase of 2.4%. The number of customers using prepaid cards decreased slightly, contract customers increased by 3.6%. High-speed connectivity is being used by 421,000 customers, and the number of T-Mobile TV users increased by 10%, to 231,000. 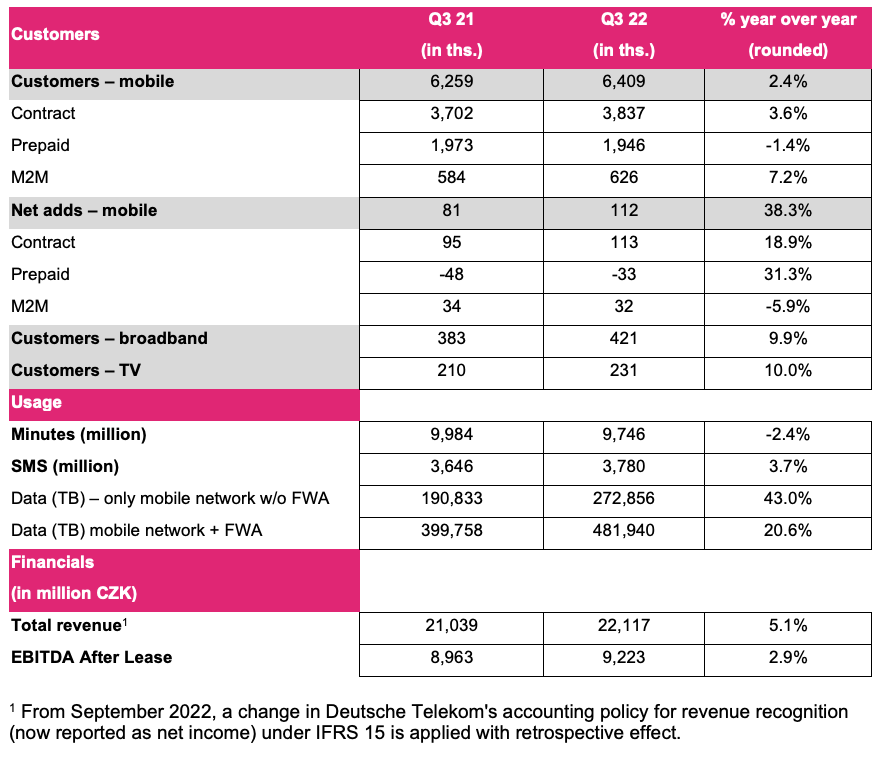