Prague, August 8, 2019 – In first half of 2019, T-Mobile saw growth in both the customer base and in the basic financial indicators. Consumption of fixed-line and mobile services grew, particularly in the area of data. The operator improved its data offer and introduced unlimited summer data campaign, further rolled-out its fibre network and introduced several B2B solutions.

As at 30 June 2019, T-Mobile’s mobile services were being used by nearly 6.2 million customers, of whom more than four million were contract customers.

The TV service from T-Mobile on the IPTV and satellite platform is now being used by 113,000 customers the number nearly doubled in the past 12 months. Most customers use the Magenta 1 service. The most popular and the most appreciated aspect of IPTV continues to be the time-shifting feature: customers currently view more than three million programs using this feature every month.

The flagship of TMCZ´s converged service, Magenta 1, celebrated its first anniversary on the market in Q1. The more mobile and fixed-line services customers combine under one contract within this service, the more benefits they receive from the operator. One year after the introduction of the service, two-thirds of customers are using a combination of mobile and fixed-line services. Seventy per cent of new fix service activations take place within Magenta 1 plans. Nearly a half of Magenta 1 customers use 4 plus services, with the most popular and most frequent combination being two Mobil S generation plans with fixed-line home internet and T-Mobile TV.

“We are really proud of such results, as our long-term objective is to become the first choice for customers using convergent services,” says Juraj Bóna, Director of T-Mobile Czech Republic, adding: “We can clearly see Magenta 1 was a step in the right direction. Flexibility, financial savings, data on top and other advantages for customers motivate more and more households to enjoy the offer. An important feature of the program is freedom – customers can choose services according their individual needs. This is something we want to keep in our offer also in future.”

The number of minutes called and text messages sent in the T-Mobile network has remained approximately the same; however, a current trend consists in the growing consumption of data services. The overall volume of data transmitted by means of converged (includes mobile data, Internet bez drátu, Pevný internet vzduchem and Pevný internet do zásuvky) has grown by nearly 99% year-on-year to more than 135 thousand TB.

T-Mobile is also increasing customer satisfaction by means of the My T-Mobile mobile application, which is now actively used every month by more than 1,474 thousands customers, they represent 49% of users with smartphones (nearly a quarter of the customer base). The most appreciated features are a clear overview of consumption and payments, easy payment method, number of special offers or competitions. T-Mobile, as a first operator in CZ, enriched payment methods with Apple Pay a GPay in March this year.

T-Mobile also continued with massive strategic transformational activities of its network and IT technology that are based on maximum leveraging of synergic effects of possible cross-border cooperation with Slovak Telekom, either in terms of harmonisation of respective corresponding functional blocks or direct application of shared parts of systems and applications, for example in the context of disaster recovery concepts. These efforts include regular elements of standard fixed and mobile telecommunication networks, like for instance PCRF, IMS, ePC, various monitoring, alarming and maintenance subsystems, but also VAS topics like TV services platforms.

Total revenues from mobile and fixed-line services including hardware sales approached CZK 13.6 billion in the first half of the year, which is a 2.5% year-on-year increase. The results confirm the company’s good performance and its position as the number-one operator on the Czech market. 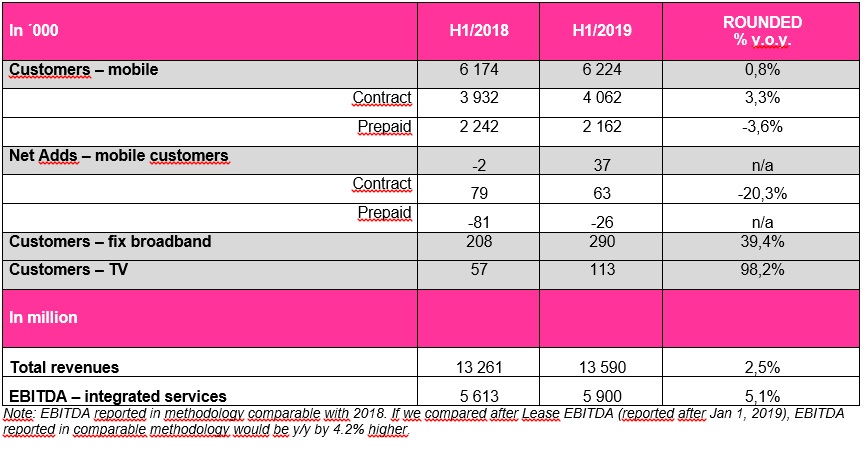