Deutsche Telekom’s mobile game ‘Sea Hero Quest’ has been played by over 2.4 million, contributing to the world’s first global benchmark for human spatial navigation and the largest dementia study in history
The initial results are already expected to facilitate the development of new early diagnostic tests for dementia
Sea Hero Quest will now be adapted for use in a clinical setting

Launched by Deutsche Telekom in May of this year, the mobile game ‘Sea Hero Quest’ sets new standards in dementia research. The game has been developed in collaboration with Alzheimer’s Research, scientists and game designers. More than 2.4 million people have played ‘Sea Hero Quest’ to date, creating the first global benchmark for human spatial navigation. This has been recognised as a key step in the development of new, early diagnostic tools for dementia. Sea Hero Quest has tested the spatial navigation abilities of people of all ages and genders, all across the world. The research team have presented the initial findings from the analysis of the data set generated by the game at leading global conference, Neuroscience 2016 in San Diego.

Deutsche Telekom's ‘Sea Hero Quest’ is a direct example of the company's ethos of digital responsibility and of its leadership in innovation. “Millions of people have provided data to help in the fight against dementia. This vast amount of data, from a secure cloud, allows us to provide scientists with the raw materials they urgently need for cutting-edge research", said Tim Höttges, CEO of Deutsche Telekom. “Digitisation is groundbreaking in terms of progress in public health.”

Dr. Hugo Spiers of University College London has been leading the analysis of the anonymous player data alongside Dr. Michael Hornberger, Professor of Applied Dementia Research at the University of East Anglia. Initial findings from the effort indicate that our spatial navigation abilities begin to decline from early adulthood (sample analysis began at 19) and that they continue on this trajectory across the lifespan (for example, those aged 19 were 74% likely to accurately hit a target during the game, whereas this figure had reduced to 46% amongst those aged 75). This progression is in stark contrast to previous smaller scale studies (sample size circa 100) which had previously suggested such a decline to be expected in later life.

Dr. Michael Hornberger comments “One of the first effects of dementia is a loss of spatial navigation and that’s why it’s of paramount importance we find out more about the brain’s spatial navigation abilities, in order to identify what goes wrong during the onset of dementia. The amount of data that has already been generated by people playing Sea Hero Quest all around the world is phenomenal and is enabling us to reveal a vital global benchmark of how people, of all ages and from all over the world use spatial navigation."

Findings indicates that those regions of the brain that are essential for navigation processes may be more susceptible to dementia than areas that control memory. It could therefore now become possible to diagnose the onset of dementia in patients long before they exhibit any signs of memory loss. In turn, this will enable the diagnosis and treatment of patients far earlier with future pharmacological and non-pharmacological therapies.

When analysing completion of the ‘flare levels’ (path integration ability which assesses the ability to point back to the start of a novel route) in the game, men and women were shown to have employed different spatial navigation strategies to complete the level.

Key differences across the nations have also been found with the Nordic countries (Finland, Sweden, Norway, Denmark) appearing to have particularly noteworthy spatial navigation capabilities across the set of 193 nations of the world contributing to the sample. 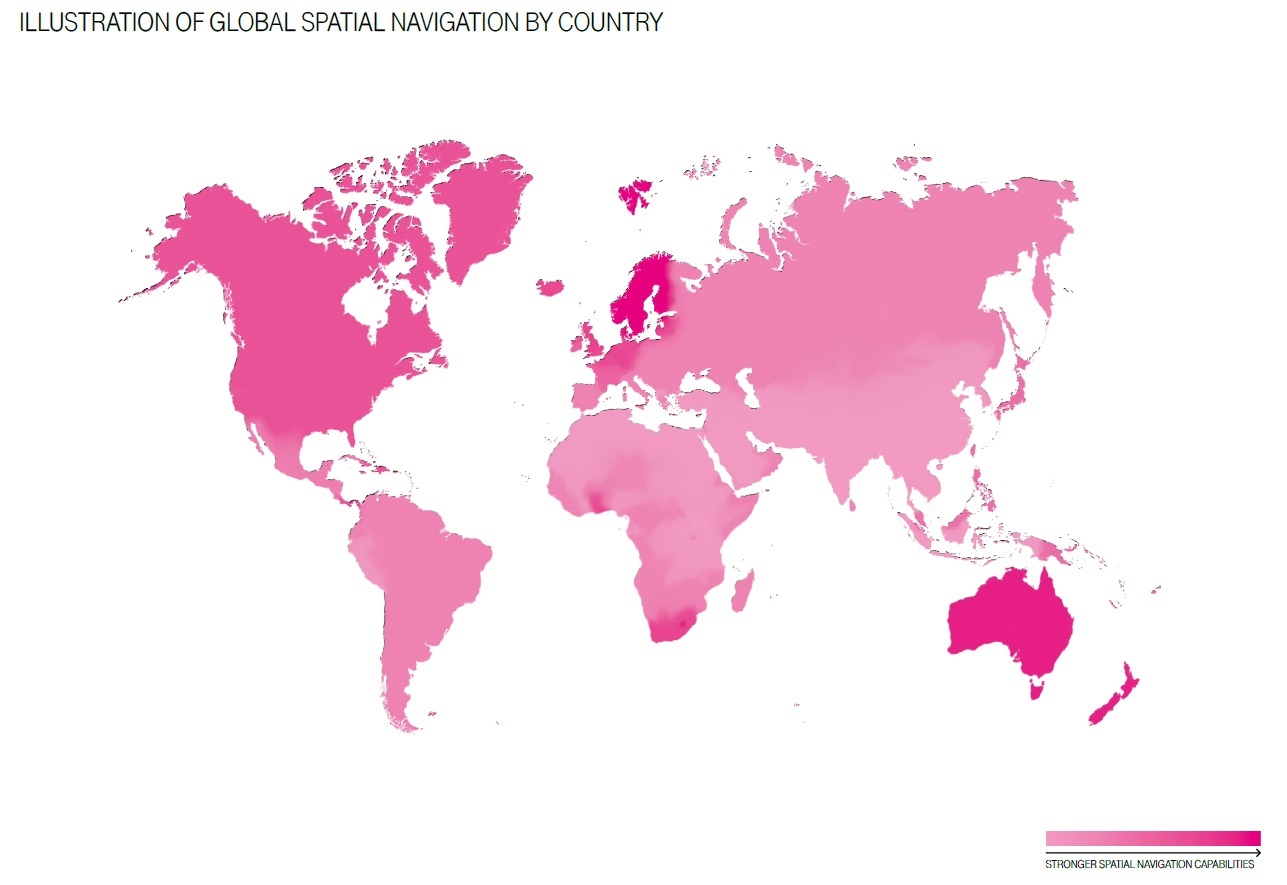 Understanding these points of difference is significant as it ensures such factors are accounted for during diagnosis and treatment, potentially leading to greater accuracy and efficacy.

"This is the only study of its kind, on this scale, to date. Its accuracy greatly exceeds that of all previous research in this area," explains Dr. Hugo Spiers in discussing the game's importance. "The findings the game is yielding have enormous potential to support vital developments in dementia research. The ability to diagnose dementia at early stages, well before patients exhibit any signs of memory loss, would be a milestone. This study is thus now giving us the opportunity to make a real difference to the lives of millions of people living with dementia and those at risk of developing the disease in the future."

Cloud technologies are powering digitalization – and digital technologies hold great promise for the health-care sector, as Dr. Axel Wehmeier, Managing Director of Telekom Healthcare Solutions, emphasizes. “Our digital expertise, combined with the scientific knowledge and experience of our partners, has enabled a major step forward in dementia research. The initial results from this project confirm that we are heading in the right direction. Research is at its most efficient when powered by innovative cross sector collaborations such as this one. Now we are excited to announce that we have taken this one step further and are now working with the scientists to adapt Sea Hero Quest for use in a clinical setting”

As part of this next step, Sea Hero Quest can now be used to support early diagnosis of dementia as well as influence the treatment of dementia patients. In the process, the mobile game will also be used to measure potential improvements in patients' spatial navigation abilities. Introducing Sea Hero Quest to a clinical setting allows for the measurement of potential improvements in spatial navigational abilities. It could therefore potentially be used in drug trials to assess the effectiveness of drug treatments.

Further analysis of the data is still to be undertaken and is expected to take two years to complete. Later analyses of the research will also assess six other demographics tracked by the game including education level, handedness, self-rated spatial navigation ability, the geographical environments in which players grew up, hours of sleep and amount of time spent travelling per day.

The impact of this research now looks set to be a real breakthrough in the battle against dementia, a worldwide epidemic predicted to affect 135 million people by 2050.

The game continues to be available for free download from the App Store and Google Play. And the data it produces are still being provided to participating scientists – and, thus, to the dementia research community.